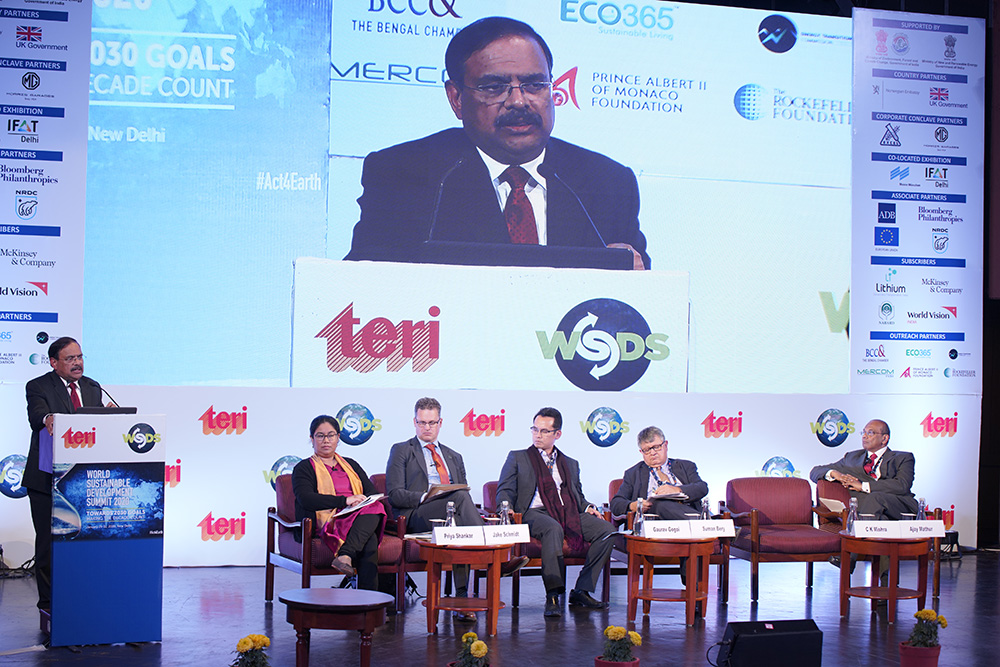 Stakeholders at the World Sustainable Development Summit (WSDS) 2020, organised by The Energy & Resources Institute, agreed upon a multi-ministerial and multi-stakeholder cooperation to tackle the issue on air pollution and to strengthen the National Clean Air Programme (NCAP) in India.

Speaking about the measures that have been laid out to tackle air pollution in Delhi in the last few years, Mr. Suman Bery, Global Fellow, Woodrow Wilson International Center for Scholars, said the motion on clean air should be an outcome of a democratic process rather than a public interest litigation (PIL) and court action. In the last three years, the particulate matter that account for pollution have come down by about close to 23%-24% and there is a gradual improvement but that is not enough, he said.

Addressing the gathering, Mr. C.K Mishra, Secretary, Ministry of Environment, Forest and Climate Change (MoEF&CC), said there is a need for scientific methods to address climate change rather than traditional approaches. The government should initiate air control measures, reduce construction and convertible non-biomass (CNB) waste, but it should be a shared responsibility with other institutions as well as people to get the results, said Mr. Mishra, adding that city-specific plans should be designed to address city-specific solutions.

The session also dispelled certain misunderstandings about air pollution. India is believed to be one of the most polluted countries, but the fact remains that three-fourths of the country appears green on the air quality index (AQI) and the problem lies largely in the Indo-Gangetic plains, explained Dr. Ajay Mathur, Director General, TERI. Putting up 100 smoke towers in Delhi and expecting everything will go green does not make sense, he said, adding that air pollution is largely centred around the Indo-Gangetic plains because of the confluence of several factors such as geography, climate, population, agricultural practices as well as fossil fuel emissions. The convergence factor shows up the most during winters, when the region sees spells of dense fog due to cold winds coming in from the west and is further aggravated by the practice of crop burning. It is also the region with the highest use of coal and wood for cooking, which is also very polluting.

On the role of legislature and its contribution to improve air quality, Mr. Gaurav Gogoi, Hon’ble Member of Parliament, emphasised on making legislature more engaged on the issue. He said air pollution should not be a bipartisan issue, rather a national issue.

While there has been success in increasing the inter-ministerial conversation on air quality, Mr Gogoi is using the legislative route to include the health impacts of air pollution into India’s Air (Prevention and Control of Pollution) Act, like the US Clean Air Act, such that it has legal bearing. To give a strong data based structure to air pollution reform, he also recommended the government to commission a health study to identify and establish indicators of impact on health, with these data findings having consensus across all ministries, departments, and agencies.

By empowering the Central Pollution Control Board (CPCB) and State Pollution Control Board (SPCB), he argued, India would be able to strengthen the implementation of the National Clean Air Programme. Citing the previous health challenges that India had successfully tackled (including the eradication of polio), the nation has the wherewithal to end air pollution.