Multilateralism and Global Action in the Anthropocene for Planetary Resilience 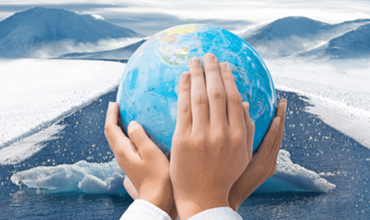 Earth’s history is divided into a hierarchical series of smaller chunks of time, referred to as the geologic time scale. These divisions, in descending length of time, are called eons, eras, periods, epochs, and ages. Officially, the current epoch is called the Holocene, which began 11,700 years ago after the last major ice age. The Anthropocene Epoch is an unofficial unit of geologic time, used to describe the most recent period in Earth’s history when human activity started to have a significant impact on the planet’s climate and ecosystems. Human activities are causing unprecedented levels of temperature rise with Earth’s surface temperature already crossing 1 degree Celsius, according to the 2021 report of the Intergovernmental Panel on Climate Change. The evidence that the Earth is warming is unequivocal, and anthropogenic emissions of greenhouse gases, most importantly carbon dioxide (CO2), have been responsible for most of the warming since the middle of the twentieth century.

There are nine planetary boundaries: (i) climate change; (ii) change in biosphere integrity (biodiversity loss and species extinction); (iii) stratospheric ozone depletion; (iv) ocean acidification; (v) biogeochemical flows (phosphorus and nitrogen cycles); (vi) land-system change (for example deforestation); (vii) freshwater use; (viii) atmospheric aerosol loading (microscopic particles in the atmosphere that affect climate and living organisms); (ix) introduction of novel entities (e.g. organic pollutants, radioactive materials, nano-materials, and micro-plastics)1. Four boundaries of climate change, loss of biosphere integrity, land-system change, and altered biogeochemical cycles (phosphorus and nitrogen) have been crossed (Steffen et al. 2015). Out of these, climate change and biosphere integrity are ‘core boundaries’ which implies that their significant alteration would drive the Earth System into a new state. It is evident that the planetary nature of the challenge is unique and demands a global-scale response that goes beyond national boundaries and cultural divides.

There are three main discourses2 that connect environmental realities to global politics. These include: (i) endangered world; (ii) entangled world; (iii) extractivist world.

The ‘endangered world’ discourse focuses on the role of multilateral institutions in effectively tackling the sustainability crisis and effectively govern the Anthropocene, as well as balance competing national interests and facilitate coordinated policy responses. Hence, the liberal democratic order organized around mutlilateral organization (including multlateral development banks) and various treaty-regimes remain central to the vision of global politics.

The ‘entangled world’ is marked by melting ice caps, thawing permafrost, acidified oceans, accelerating deforestation, degraded agricultural lands and dramatic species loss, where human activity and nature are so enmeshed that they are existentially indistinguishable. According to the literature, a complex but singular ‘social nature’ is now the new planetary real.

The ‘extractivist world’ looks at the Anthropocene debates from a neo-Marxist approach, which questions the global capitalist system and the monumental damage and injustice done by its ceaseless need for expansion, accumulation and extraction. This discourse presents a highly unstable, uncertain and risky political landscape in which the speed and scale of destruction has ruined the biosphere's capacity to recover.

The second important aspect lies on what would be the governing mechanism for areas beyond national jurisdiction. The UN Convention on the Law of the Sea is an important instrument of the high seas. Likewise, the UN Committee on the Peaceful Uses of Outer Space and the Antarctic Treaty system govern the global commons of Antarctica and the outer space. In 1994, the UN Commission on Global Governance proposed to reform the UN Trusteeship Council and to give it a mandate over the global commons. The challenges for issues beyond national jurisdiction are rapidly increasing which include the impacts of climate change, depleting fish stocks and integrity of the biosphere.

An emerging body of work on ‘earth system governance’ focuses on systems needed for navigating the complexities of Anthropocene within the normative context of sustainable development. Multilateral cooperation to tackle planetary challenges can exhibit increasing returns through positive feedback loops. It is essential to consider the economic and social embedded-ness when considering initiatives of planetary resilience along with issues of the ‘ungoverned’ or global commons.

In this context, The Energy and Resources Institute is organizing the plenary session during the 2022 edition of World Sustainable Development Summit on how multilateral institutions and stakeholders at all levels can collectively address issues related to planetary resilience in the Anthropocene.

The session will be a moderated discussion which will start with remarks (2-3 minutes) by the moderator. This will then be followed by the Leadership Addresses wherein each speaker will then get 7-8 minutes for delivering the Leadership Address. After this, a 20-minute rapid fire round will follow where the moderator/ chair asks 2 questions based on issues emerging from the discussions and asks for a ‘one sentence answer’ from all the 5-6 speakers present. Strict time management is to be followed. There will be an on-screen timer for the same.